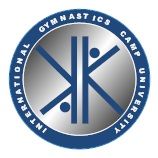 the latest, most comprehensive technical information specific to gymnastics coaching presented in an easy to learn, well-illustrated practical format, Championship Gymnastics by Gerald S. George, Ph.D., a worldwide respected authority in the biomechanics of gymnastics!

your competency and coaching knowledge in biomechanical techniques as it relates to championship performance in gymnastics!

an official IGC Certificate of Merit specific to Level I - Biomechanical Techniques of Gymnastics from IGC University, the world recognized leader in gymnastics education!

your gymnasts with sound coaching practices and protocols that are second to none in the world!

Dr. Gerald S. George, Professor Emeritus, Department of Kinesiology at the University of Louisiana, is a world-wide, respected authority in biomechanics of sport and injury causation. Having served as author, contributor and/or senior editor to over 10 textbooks and 120 article publications specific to gymnastics training and technique, Dr. George’s writings, research and lectures are well-known throughout the gymnastics world. The most notable of his works include the classic Biomechanics of Women’s Gymnastics which was the best-selling gymnastics textbook in the world for 3 consecutive years. His newest textbook, Championship Gymnastics, has received tremendous reviews worldwide, has been the best-selling gymnastics textbook internationally for the past 8 years, has been adopted by Gymnastics Australia as their Elite Coaches’ Educational Textbook, and is currently being used in 50 countries.

Most recently, Dr. George was inducted into the LSU Alumni Hall of Distinction (2011). Throughout his career, Dr. George has been and remains a sought-after lecturer and clinician by gymnastics professionals throughout the United States, Canada, Europe, Australia and China.

Select a course first to display its contents.

No available contents for

There are no free, paid or coming soon courses in your school yet.
Why don't you create one?

Oops, your school's owner is working hard preparing the courses for you.

Oops, you haven't created any courses yet.

Wouldn't it be a good idea to create a course?

No blog posts found in your blog. Why don't you create one?